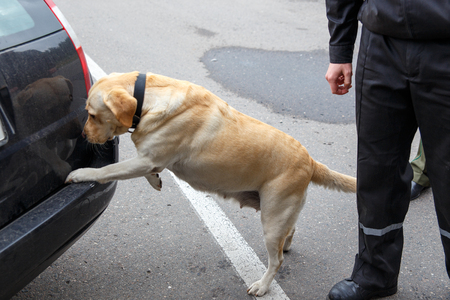 When Dog Sniff Searches Lead To Drug Charges In Wisconsin

It’s not unusual for a routine traffic stop to lead to a vehicle search or for those searches to involve K-9 units. Sometimes those searches turn up evidence of drugs and lead to drug charges. Wisconsin criminal defense attorneys will often find that officers had no justification for the search and, thus, no justification for holding the driver for a prolonged period of time in which to conduct the sniff search. These arguments can lead to evidence suppression and cause the charges to be dropped or reduced.

The Role Of Reasonable Suspicion

A recent case decided by the Seventh Circuit Court of Appeals reaffirms the role of reasonable suspicion in dog sniff cases. In United States v. Guidry, Guidry was detained as part of a routine traffic stop. Upon approaching the vehicle, the officer detected a slight smell of marijuana coming from the car, but could not determine if the odor was coming from inside or outside the vehicle.

He decided that he did not have probable cause to search the vehicle and simply asked Guidry for his license to complete the paperwork. It was at this time that the officer learned that Guidry was suspected of buying and selling drugs. This changed the situation. Based on this information and the smell, he requested a drug-sniffing dog to inspect Guidry’s vehicle. Approximately five minutes after the call, the K-9 unit arrived. Guidry objected to the dog sniff at first, but ultimately exited the vehicle.

The police dog immediately identified the smell of marijuana in the vehicle and alerted the officers leading Guidry to admit that he had been smoking and that “half a blunt” was still in the car. The successful find in the vehicle lead to the department obtaining an additional warrant to search Guidry’s home. Here it was discovered that Guidry was selling a wide variety of narcotics and engaging in prostitution. He was then charged with several offenses.

At trial, Guidry moved to suppress the evidence obtained from his vehicle, arguing that the stop had been improperly delayed and expanded to include the dog sniff, without reason to do so. The court disagreed, finding that the police officer had reasonable suspicion to call for a dog sniff. Guidry appealed.

On appeal, the Seventh Circuit affirmed the lower court. The appellate court found that reasonable suspicion existed in this situation given the officer’s detection of the smell of marijuana smoke and knowledge that the driver was being investigated on suspicion of dealing drugs. These two facts provided enough reasonable suspicion to investigate further and to call for a dog sniff. The court also noted that the second officer and dog arrived on the scene within five minutes of the initial call, which did not constitute an unreasonably prolonged stop. It was not surprising, then, that the court affirmed the lower court’s decision.

Were Your Drug Charges The Result Of An Improper Search?

If you are facing drug charges in Wisconsin and think you may have been subject to an improper search, contact the criminal defense attorneys at Eisenberg Law Offices. It’s possible the search was improperly conducted and your constitutional rights violated. Contact the attorneys at Eisenberg Law Offices for a free consultation and assessment of your situation at 608-256-8356 or Info@EisenbergLaw.org.

The Information Contained In This Site Is Not Intended To Provide Legal Advice. Please Consult An Attorney To Discuss The Facts Of Your Individual Situation. Eisenberg Law Office, S.C. 308 E. Washington Ave., Madison, WI 53703 USA (608) 256-8356